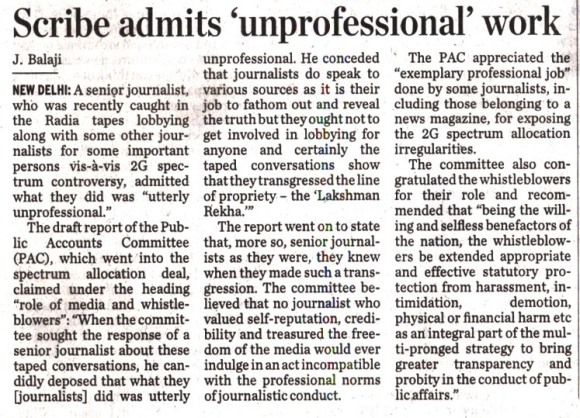 Several print and television journalists found their voices on the Niira Radia tapes. Some expressed remorse at such a cosy relationship with the lobbyist; some like you-know-who brazened it out.

Now, The Hindu reports that one senior unnamed scribe who was caught on tape lobbying has candidly admitted that what they did was “utterly unprofessional”.

The paper reports that the draft report of the Public Accounts Committee (PAC), which went into the 2G spectrum allocation deal, has this paragraph under the heading “role of media and whistleblowers”:

“When the committee sought the response of a senior journalist about these taped conversations, he candidly deposed that what they [journalists] did was utterly unprofessional. He conceded that journalists do speak to various sources as it is their job to fathom out and reveal the truth but they ought not to get involved in lobbying for anyone and certainly the taped conversations show that they transgressed the line of propriety – the ‘Lakshman rekha.’”

When Rajdeep Sardesai got it left, right and centre

Is it really so difficult to say, sorry, maaf karo?