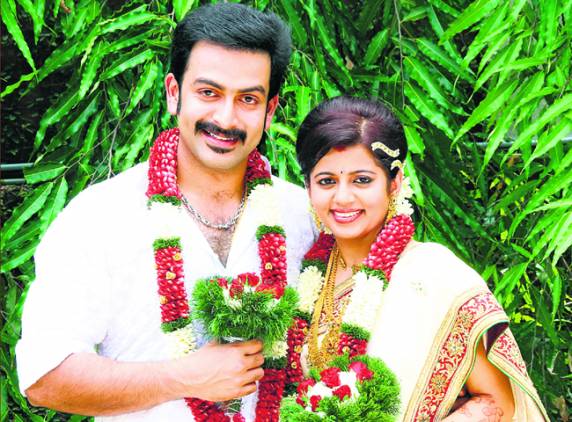 Indian film stars—like politicians, businessmen, cricketers and others—rarely have anything nice to say about journalists and journalism, except when they have something to sell. Some, like Amitabh Bachchan and Ram Gopal Verma, have built a cottage industry biting the hand that feeds them to the masses.

How nice therefore to find an inhabitant of tinsel world say “I do” to one of our own.

The Malayalam heartthrob Prithviraj Sukumaran tied the knot with Supriya Menon, the BBC’s business correspondent based in Bombay, in the latter’s home town of Palghat, on Monday. A reception has been planned in Ernakulam for May 1.

The two apparently met a year ago while Supriya was reporting on southern cinema, presumably for the BBC weekend programme, India Business Report, of which she was anchor-correspondent for a while.

“My wife was working as a reporter for a TV news channel. Being a South Indian, she was assigned to do a feature on South Indian cinema. When she called me, I was watching a special screening of SRK’s Don and could not talk to her and told her I would call her back. Next day, when I returned her call, coincidentally she was also watching Don. While that feature did not happen, due to this one call, we started talking and we discovered that we had the same view on the film. Also, we were coincidentally both reading The Fountainhead at that time. And then Shantaram happened and I was so fascinated by how Gregory David Roberts painted Mumbai in the book that I wanted to come to Mumbai and see Haji Ali and Leopold cafe. She showed me around and we fell in love through Bombay that later lead to us getting married.”

But Indo-Asian New Service (IANS), quoting the groom’s mother reports, that the two families knew each other for a long time and the couple were “childhood friends”.

The Times of India, quoting unnamed sources, says what attracted the film star to the journalist was her “intellectual quotient”.

The New Indian Express reports that local photographers and TV channels were not allowed inside the wedding venue. While over a dozen private photographers covered the function, the bride and groom left “without speaking to the journalists waiting outside the gate”.

Deccan Chronicle, which apparently broke the news of the “whirlwind romance” and the impending wedding only for it to be described as “baseless journalism” by the actor, reports that Prithviraj’s wedding to the journalist has broken the hearts of thousands of his female fans.

Also read: When a politician weds a journalists, it’s news