G. Kasturi (left), with editor-in-chief N. Ram (centre) and his younger brother, managing director N. Murali, at the 125th anniversary celebrations of The Hindu, in September 2003

ARVIND SWAMINATHAN writes from Madras: As if to prove the old adage that blood is thicker than water, there have been four rounds of internecine strife in the last 22 years in the undivided Hindu family that owns and runs India’s “most respected” newspaper.

To no one’s surprise, Narasimhan Ram aka N. Ram, the card-carrying Marxist who drove CPI (M) strongman E.M.S. Namboodiripad around town, and was a college mate of current CPI(M) general secretary Prakash Karat, has been the central figure in all four of them.

Equally unsurprisingly, the warring parties in the first round have found themselves on the same side of the war in the next three skirmishes.

The first great HINDU mahayudh of 1989

The issue: Discontinuation of Bofors investigation

The war: Uncharacteristically, The Hindu which prides itself as a “newspaper of record”, goes ballistic about the Bofors scandal, thanks to Chitra Subramaniam, who has hopped over to the paper from The Indian Express, carrying the Bofors legacy. Chitra and N. Ram, then no.2 in the editorial hierarchy, do a number of jointly bylined stories. In October 1989, The Hindu publishes the first part of a three-page article with the promise “To be continued”.

However, Kasturi blocks the second instalment and publishes a front-page note explaining the discontinuation. It reads, “Enough has been written supported by extensive documentation in The Hindu to establish the face of the cover-up and the non-serious pursuit of the investigation by the official agenies and give the lie to the government’s latest assertions.”

Miffed, Ram goes public and issues a statement against his uncle (G.Kasturi is Ram’s father, G. Narasimhan‘s brother) for acting “arbitrarily, capriciously and in a manner highly derogatory of the traditions, norms and values of independent, ethical journalism,” and calling the editor’s note “a conspicuous insult to the traditions of independent, intellectually and socially serious, and ethical journalism.”

At a press conference, Ram also freely distributes the unpublished second-part of the Bofors investigation, with all the relevant documents, and invites newspapers to carry it. Ram also approaches the Press Council of India with a 15-page complaint against G. Kasturi.

The fallout: Ram is divested of his responsibilities at The Hindu, and sinecured to take charge of the group’s fortnightly, Frontline, and the sports weekly, Sportstar. G. Kasturi makes way for N. Ram’s youngest brother N. Ravi, who takes over as editor in 1991. From the other side of the family tree, Ram’s cousin Nirmala Lakshman becomes joint editor, and her sister Malini Parthasarathy becomes executive editor under Ravi. Chitra Subramaniam exits The Hindu and has “many harsh things to say about Ram.”

The second great HINDU mahayudh of 2003

The issue: The editorial direction of The Hindu

The war: Against the backdrop of complaints that the paper was veering far too much to the left and alienating “loyal” readers with its anti-Jayalalitha and anti-Hindu stance, the board of directors of Kasturi & Sons passes a resolution appointing whole-time director N. Ram (till then editor of Frontline and Sportstar) as editor-in-chief of The Hindu, placing him over editor N. Ravi.

The change of guard comes just three months before the 125h anniversary celebrations of the “Mount Road Mahavishnu.”

“It is true that our readers have been complaining that some of our reports are partial and lack objectivity. But it also depends on reader beliefs,” joint managing director N. Murali, the brother of N. Ram and N. Ravi, is quoted as saying. Ram takes charge, promising to keep news and opinion separate.

The fallout: Ram presides over the 125th anniversary, with neither Ravi nor Malini in the frame. In November 2003, the Tamil Nadu government turns The Hindu into a cause celebre by ordering the arrest of the publisher of The Hindu, S. Rangarajan, journalists V. Jayanth and Radha Venkatesan, and N. Ravi and Malini Parthasarathy for breach of privilege of the assembly for articles that had appeared in April of that year. Although they continued to be editor and executive editor respectively, neither Ravi nor Malini write for several years. 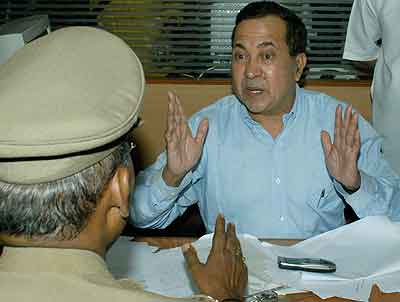 Tamil Nadu police enter the cubicle of editor-in-chief N. Ram at The Hindu offices, in November 2003

The third great HINDU mahayudh of 2010

The issues: Retirement norms for family member-directors; entry norms into the business for younger members of the family; overall corporate governance issues

The war: The two aggrieved brothers of N. Ram say he reneged on a September 2009 promise to retire by May 2010 upon turning 65, thus paving the way for N. Ravi to take over as editor-in-chief.

By a 9-3 vote, the Hindu board kicks N. Murali upstairs by making him senior managing director confining his powers to only the circulation department; simultaneously G. Kasturi’s son K. Balaji is made managing director with overarching powers. Ram tells Business Standard that Murali had been redesignated “with his consent at the board meeting” and that Balaji had been appointed MD “as part of succession planning, which has been actively advocated by Murali to his credit.”

Malini Parthasarathy, who is not married, is most aggrieved by this turn of events. The Indian Express reports that Ravi and Malini objected to the manner in which “Kasturi’s resources, financial as well as editorial, were used to further the interests of some board members.”

The fallout: Ram makes public the decisions taken by the board in a front-page announcement. The issue goes to the company law board (CLB), which in December 2010 orders the reinstatement of N. Murali as managing director but declines to interfere with new appointments made, including that of K. Balaji as managing director, or to implement a retirement age for family members on the company’s board.

The fourth great HINDU mahayudh of 2011

The issue: Separation of management from editorial

The war: Less than a month before he is to demit office upon turning 65, Ram breaks with tradition and announces that the board has decided to appoint a “professional editor” who will be responsible for selection of news under the PRB act. This, he adds, is to happen when N. Ram steps down as editor-in- chief and N. Ravi steps down as editor.

“The other directors working on the editorial side would also step down from their current editorial designations in such time as the board may decide and become part of a committee of the board of directors known as the editorial board,” the board decides in a 7-5 decision.

N. Ravi, who joined the company in 1972 and was waiting to take over as editor-in-chief from Ram, shoots off a mail to all employees against the “shocking display of bad faith” by his brother. “Ram seems bent on taking all the editorial directors — most are in their 50s — into retirement with him, with a scorched earth policy to ensure that no one in the family succeeds him…. In a sudden change of rules and under the specious plea of separating ownership from management, along with my removal as editor, Nirmala Lakshman is to be forced to “step down” as joint editor and Malini Parthasarathy as executive editor.”

Ravi also accuses Ram of going soft on 2G scam accused A. Raja, of hogging the limelight in an “unceasing self-glorification campaign”, and a pronounced pro-China tilt.  Ravi’s contention that there was quid pro quo amounting to paid news in an interview with A. Raja in exchange for an advertisment is shot down by Ram at a press conference in Delhi, where he calls the charge “egregariously defamatory“.

The fallout: The dispute is likely to go to court. Malini Parthasarathy tweets: “After me the deluge”! Real story at The Hindu is the removal of a sitting Editor and continuing backdoor control of editorial by proxies.” N. Murali, who is away in the United States, says that the attempt to alter the basic structure of the business should be passed with a three-fourths majority by the EGM on May 20.

Under N. Ram, The Hindu becomes an apology of a paper