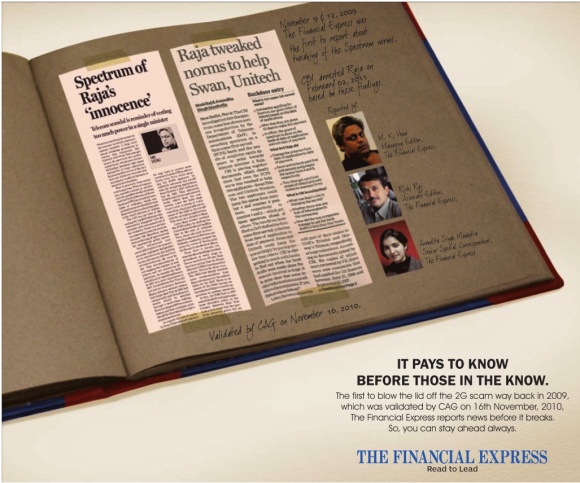 It is the year of the lord, 2011, but it is still not too late to claim credit for the 2G spectrum allocation scam.

Nearly a week after the disgraced telecom minister A. Raja was arrested, marking the end of the beginning of the scam, today’s Indian Express carries a five-ad campaign saluting its sister business daily, The Financial Express, for its role in busting the scandal that takes a new dimension every single day.

Using headlines from pieces carried by it in the October 2009 to November 2010 period, the low-circulation FE proclaims its punchline: “It pays to know before those in the know”.

Those who came in late will be pleased to know that (so far), The Pioneer, The Times of India, CNN-IBN and Times Now have put their hands up.

Mail Today had crowned Janata Party president Subramaniam Swamy and rediff.com chose the (BJP-aligned) member of Parliament, Rajeev Chandrasekhar, for exposing the scam that now seems to have reached outer space with the S-band scam reported by The Hindu and its business daily, Business Line.

Also read: Everybody loves (to claim credit for) an expose

Have Tatas blacklisted The Times of India again?

The Pioneer journalist who brought A. Raja to book