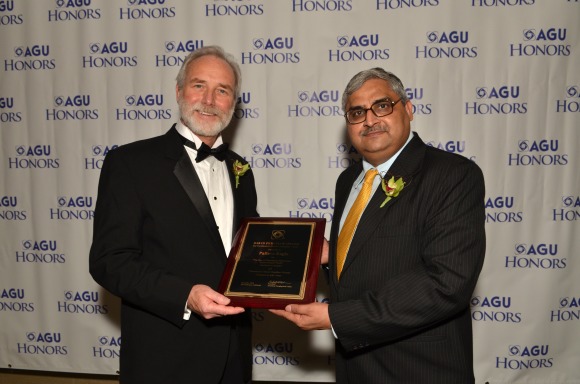 Noted science journalist Pallava Bagla has become the first Indian to bag the David Perlman award for excellence in science journalism, given out annually by the American Geophysical Union (AGU).

The award, described as the “Oscars of earth and climate science”, was presented to Bagla (in picture, right) at a gala event held in San Francisco on December 15.

The high honour comes as a recognition for Bagla’s expose of the error made by the United Nations’ Intergovernmental Panel on Climate Change (IPCC) which, in its 2007 report, had grossly over-estimated the melt rate of Himalayan glaciers predicting that they will disappear by 2035.

Ultimately in January 2010, the IPCC offered a “regret” for this error.

“His articles serve as a reminder to journalists to question sources, to think harder about the agendas and ideas of those people about whom they are reporting, and to stop the steamroller of opinions or ideas when the facts just don’t back them up. Although Bagla’s articles reveal embarrassing foibles of scientists, ultimately they also illustrate science’s ability to self-correct.”

The first of Bagla’s two articles “No Sign of Himalayan Melt Down, Indian Report Finds“, was published in the journal Science, exploring dissent among glaciologists regarding the claim by the IPCC that Himalayan glaciers would imminently disappear.

The second article, “Himalayan Glacier Deadline ‘Wrong‘”, published by BBC News, reported on an apparent typographical error in the IPCC claim which appears to explain the panel’s controversial, 300-year acceleration of when Himalayan glaciers are expected to vanish.

Photograph: Pallava Bagla with the plaque of the David Perlman award for excellence in science journalism and Michael J. McPhaden, president of the American Geophysical Union