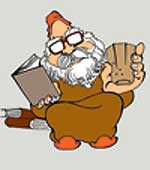 Battered by one and all but one, Barkha Dutt, the NDTV anchor caught on tape in l’affaire Niira Radia, gets some much-needed support, but from the dirty old man of Indian journalism, her Hindustan Times co-columnist Khushwant Singh.

But unlike the editors guild president Rajdeep Sardesai who blamed it on “envy”, Singh attributes it to “malice”:

“Two leading lights in Indian journalism, one in the print media, the other a top TV star who has the widest viewership and is known for her guts and integrity, are being maligned for listening to a woman in public relations representing some big industrial houses.

“I went through all that passed between them on telephones but failed to figure out anything unethical in their dialogue. The public relations lady pleaded the cause of the firms that she was representing. The journalist heard what she had to say as every good journalist is expected to do and make his own assessment before he wrote on the subject.

“The lady in India’s leading channel was asked to do sifarish (recommend) on behalf of an ambitious politician. The story sounds totally fatuous: a sifarish by a mediaperson carries no weight whatsoever. What the libelers and slanderers have to prove is that money was given to the two for doing their bidding. There is not even a remote suggestion that this was so. It was done out of pure malice to tar the images of two much respected mediapersons. “