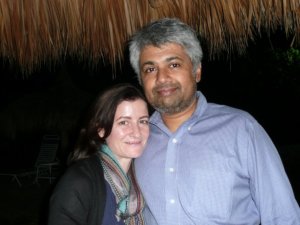 Tunku Varadarajan, the Indian-born, US-based writer-educator, has been named the new editor of Newsweek international, becoming the second journalist of Indian origin after Fareed Zakaria to hold the reins at the American magazine.

Tunku broke the news through a tweet on Wednesday: “My news: Looks like I’ll be editing Newsweek International”.

Born Patanjali Varadarajan, 48-year-old Tunku—named after the father of Malyasia’s independence—is currently writer-at-large at The Daily Beast, the online magazine floated by legendary British editor Tina Brown. His appointment comes as part of the revamp of the struggling magazine, after the Washington Post company sold it to stereo tycoon Sidney Harman for one dollar (Rs 45) earlier this year.

Tunku, whose brother Siddharth Varadarajan works for The Hindu in New Delhi, has served as the correspondent of The Times, London, in Madrid and New York; worked at the editorial and op-ed pages of the Wall Street Journal; and taught business at New York University and journalism at Stanford.

When his old boss Rupert Murdoch (who owns The Times) bought the WSJ, Tunku left to join Forbes.com.

In 1997, the 50th anniversary of India’s independence,  a  New Yorker item listed the nattily dressed Tunku, then 34, as one of New York City’s “most in-demand bachelors”.

“‘At the Times, we used to have a rule. Always dress as if you might have to go to a funeral or interview a Cabinet minister’…

“How often is he invited out? ‘Every day, I fear. A lot of these calls I take completely blind,’ he says, sipping a Scotch-and-soda. ‘If the person’s voice sounds nice, I tend to say yes. I suppose this could get me into a lot of trouble.’

Cricket-mad Tunku, a firm believer in the gung-ho vivacity of British newspapers as opposed to the deadly dull objectivity of their American counterparts, called Pakistan a “State of nothing” on that midnight child’s 50th anniversary.

Photograph: Tunku Varadarajan with wife Amy Finerty. The couple have a son, Satya (via Facebook)

Also read: Who, when, how, why, where, what and WTF

How a slumdweller became a Newsweek reporter