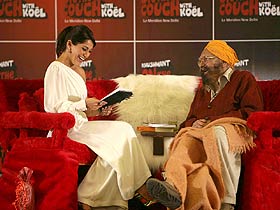 Khushwant Singh uses a session on the couch with Headlines Today host Koel Purie Rinchet to throw light on her father and grandfather Vidya Vikas Puri, in the Hindustan Times:

“Her grandfather Vidya Vikas Puri, migrated from Lahore after partition in 1947, and set up business as a financier in Delhi. He became a multi-millionaire. He decided to buy himself a Rolls Royce which was, and is, the ultimate status symbol of success. He went to London to get one.

“The salesman of the showroom snubbed him and told him he could not afford it and not to waste his time. He bought one, brought it to Delhi. At that time only descendants of erstwhile princely families drove in chauffeurs-driven Rolls Royces.

“Puri was the only commoner driving one on Delhi roads.

“His son Aroon added an ‘e’ to his surname and became a legend in his life time. He owns the largest chain of media consortiums in India: four TV channels, over a dozen weeklies, including India Today, Reader’s Digest, Harper Collins and The Thompson Press to print his journals and books. A new addition is the tabloid daily Mail Today.

“Aroon is as generous an employer as he is ruthless towards those who fail to deliver the goods.

“A case in point is the ‘elevation’ of Prabhu Chawla, his subjantawala [the man who knows everything] editor of India Today and get M.J. Akbar on Akbar’s terms to take and run it, as he sensed it was losing on its readability to Frontline, The Week, above all, to Outlook*.”

Khushwant’s column is the third piece in old media that has come to the rescue of Aroon Purie, after Sanjaya Baru‘s Business Standard nixed a column on the subject and DNA published a piece by its executive editor R. Jagannathan in defence of plagiarism.

Read the full article: Falling in love with a TV show host

How to write an editorial when not jet-lagged

‘Plagiarists speed up the spread of knowledge’

Khushwant Singh on his last day at the Illustrated Weekly