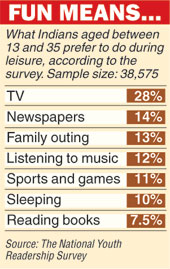 The findings of the national youth readership survey carried out by the national council for applied economics research (NCAER) on what occupies the mindspace of Indians between 13 and 35 years of age.

The survey, conducted for the national books trust, had a sample size of 38,575 literate youths in 199 towns and 432 villages in 207 districts covering all the States and Union territories.

The survey suggests that a literate youth spends an average 98 minutes everyday viewing television. Based on the sample data, NCAER said nearly 65 per cent of youth households in the country would be having a television set.