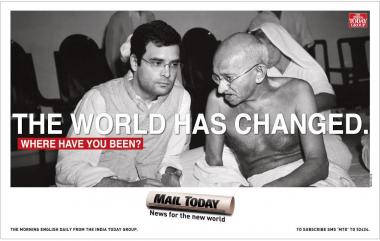 The veteran editor, columnist, author and activist, Kuldip Nayar, recounting a seminar held recently in Thiruvananthapuram by the Malayalam daily Mathrubhumi, in The Sunday Guardian:

“Mahatma Gandhi‘s is an example which every journalist must emulate. He tells us journalists that the sole aim of journalism should be service.

“In his autobiography, he says: ‘The newspaper is a great power, but just as an unchained torrent of water submerges the countryside and devastates crops, even so an uncontrolled pen serves but to destroy. If control is from without, it proves more poisonous than want of control. It can be profitable only when exercised from within.’

If this line of reasoning is correct—and there is no reason to challenge it—how many papers in the country would stand the test? But who would stop the useless? And should be the judge? I think that the useful and the useless must, like good and evil, go on together. The reader must make the choice. Any interference by the government would make a mockery of the freedom of the press.

“Today when editorial space is sold and where ‘paid news’ conceals falsehood and propagand, Gandhi’s advice that a newspaper is not meant to make money but is an insturment to serve the public, cannot be to the liking of those who have an eye on the balancesheet. They are not bothered with the indignation of people over the projection of celebrities and models as icons of society.

“Writing on the role of newspapers, Gandhiji said: ‘In my humble opinion, it is wrong to use a newspaper as a means of earning a living. There are certain spheres of work which are of consequence and have such bearing on public weflare that to undertake them for earning one’s livelihood would defeat the primary aim behind them.’

“When a newspaper is treated as a means of making profit, the result is likely tobe serious malpractice. It is not necessary to prove to those who have some experience in journalism that such malpractices prevail on a large scale.”