B.G. Verghese, the Magsaysay Award-winning editor, author and columnist, has penned his memoirs, First Draft, “a worm’s eye-view of history as an individual saw it“.

“George”, as Mr Verghese is better known, did a stint as media advisor to then prime minister Indira Gandhi. Appointed editor of the Congress-friendly Hindustan Times in 1969, he grew critical of her actions. When he suggested that “her annexation of Sikkim was less than proper”, the K.K. Birla-owned paper sacked him.

Out of the blue, as it were, a new and wholly unexpected voice broke above the newspaper din in India in 1959.

These were all new terms at that time and the overall picture that came through was that of a massive change under way in the thinking as well as structural composition of India.

It was as good as a scoop.

That was B.G. Verghese’s entry into public attention. He had entered journalism ten years earlier, unplanned and unprepared, and spent time writing editorial notes until he got himself transferred to reporting. His ground-breaking reportage on “the temples of Modern India” was a departure for journalism itself.

Verghese’s editors in the Times of India recognised this and published his series on the front page. (Those were days when the ToI was a NEWSpaper led by some of the finest journalists India has known.)

The freshness of his “Bharat Darshan” tours and the importance of the message his reports conveyed remained the trademarks of Verghese’s journalism ever since. It made him a unique institution not comparable to anybody else in the vast galaxy of Indian journalism.

It gave his career a historical edge.

Hence the relevance of his just-published autobiography, a big-ticket 573-page tome called First Draft: Witness to the Making of Modern India (Tranquebar). 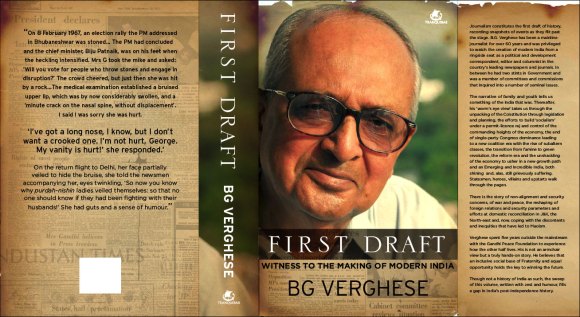 Frank Moraes, once Verghese’s editor, titled his political autobiography Witness to an Era. Both men were witnesses to great events and both were professionals to the core. But there the comparison ends. Moraes was ideologically partisan: Pro-American, pro-big business, anti-communist.

Verghese has strong views, but no ideological hangups.

Verghese crammed several lives into one. He was a reporter, an editor, a traveller, a bureaucrat as information adviser to the Prime Minister, visiting professor at the Centre for Policy Research, fellow of the Administrative Staff College of India, Chairman of the Commonwealth Human Rights Commission and of course author.

The journalist prevails over all others in the writing of this autobiography. So his account of events, his references to the dramatis personae and his summing-up observations have the appeal of honesty, not the evasiveness of diplomacy.

His stint as adviser to Indira Gandhi allows him to speak frankly about the reality of high-level activities—how drafts for after-dinner speeches are finalised only after the dinner has started, how the Government does not work out a world view and relies instead on tired slogans, “the haphazard manner in which government functioned and the Prime Minister’s inexperience in so many matters”.

B.G.Verghese is a serious person, concerned with serious, “un-sexy” topics like water resources. That makes his humour more appealing. The quality of his mind is reflected in the lightness with which he describes his introduction to the Prime Minister’s secretariat.

“There was no airconditioner in the room as the previous incumbent was a mere deputy secretary who ‘as per rules’ was not entitled to feel overly hot. The official theory was that the blood grew thinner with ascending seniority, entitling the officer to one, two or more airconditioners. The same theory worked for arm rests, back rests and foot rests….. Nor did I allow my chaprassi to hover around the car park in the morning to relieve me of my briefcase the moment I arrived. Official research had established that senior officers carry so much responsibility that the weight of a briefcase could do incalculable damage to their spine.”

His briefcase tightly held in his own hand, Verghese kept his spine straight and walked tall.

Photograph: B.G. Verghese with grand-daughters Naina and Diya at the launch of his memoirs, First Draft, in New Delhi on Wednesday (courtesy Oinam Anand/ The Indian Express)

Also read: As the year ends, a lament for the media