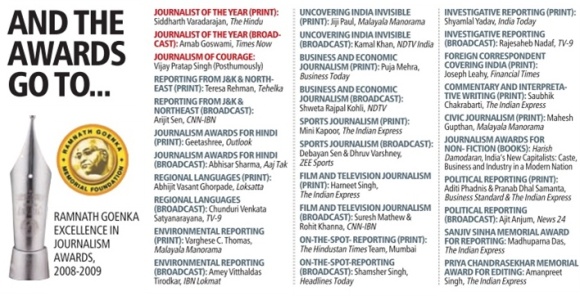 The full list of the winners of the Ramnath Goenka excellence in journalism awards for 2008-09.

Print journalist of the year: Siddharth Varadarajan of The Hindu

Broadcast journalist of the year: Arnab Goswami of Times Now

After presenting the awards, the President of India, Pratibha Patil, outlined “crisis of content and triumph of the trivial” as the two challenges facing journalism.

“…On the one hand, newspapers have to offer readers much more than what were the headlines on the TV screens yesterday. On the other hand, television channels have to constantly find ways of filling up 24 hours. Sometimes, this can lead to a crisis of content. Issues can be trivialised while trivial issues can become headlines.”