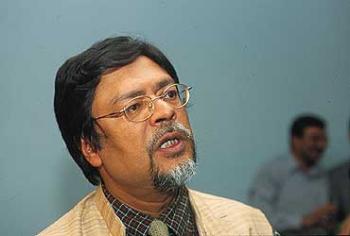 Chandan Mitra, the editor-in-chief of The Pioneer, has been elected unopposed to the Rajya Sabha for a second term, this time as a nominee of the BJP. In a piece in his paper, Mitra once again addresses the conflict of interest in being the editor of a paper and an active politician.

“While it is true that strict separation of news and views is a tall order, in recent years I have confined myself to giving broad directions to my editorial colleagues rather than working on reports hands-on. I love journalism, my profession for over 26 years and it still remains my first instinct.

“But politics has driven me throughout; it holds a charm that I find irresistible. After my election as MP this time, I don’t know if time will permit me to keep wearing two hats both of which I love, but I hope to continue doing so as long as I can….

“In 1980 I went to Oxford University to pursue a doctoral degree in history, returning in 1984 to join The Statesman and embark on a career in journalism. Taking a break from political involvement, I delved deep into my new profession resuming my interest in current affairs and amateur psephology.

“Although I got drawn towards the BJP, away from my earlier Leftist beliefs, in the early-1990s, I never thought of plunging into active politics for many years.

“Probably my ability to save The Pioneer from certain closure in 1998 and the robust nationalist tinge I lent to the paper’s editorial policy impressed then Prime Minister Atal Bihari Vajpayee and L.K. Advani sufficiently to recommend my name to the President of India for nomination to the Rajya Sabha in 2003. Thus I became an MP without contesting an election.”

Read the full article: A confessional tale of elusive elections

Also read: How Chandan Mitra has his halwa and hogs it too

The best editor The Pioneer never had?