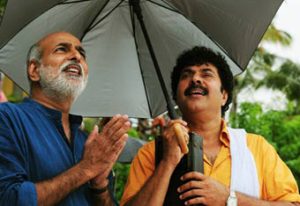 It looks like it is the season for small screen stars to graduate to the big screen.

Sashi Kumar (top frame, left), the Doordarshan newsreader of pre-satellite television days, stars with the Malayalam superstar Mammooty in the new release Loud Speaker. In the movie, Sashi, who now runs the Asian College of Journalism in Madras, plays a US-returned astrophysicist.

In Bangalore, Ranganath Bharadwaj, an anchor at the 24×7 news channel TV9, is set to put on the greasepaint for the lead role in the slightly less scientific Kannada flick, Cheluvina Gelathi. Predictably, Bharadwaj who is happily married to co-anchor Radhika Rani, will run around trees and sing a few ditties.

Kannada print journalists are not known to squirm from movie and television roles.

Ravi Belagere, the editor of the tabloid Hi! Bangalore, has starred in several films, including the controversial Mukhya Mantri I Love You. And a host of them, including the film critic R.G. Vijayasarathy and photo editor Saggere Ramaswamy have appeared in a number of movies and TV shows.