SHARANYA KANVILKAR writes from Bombay: The Times of India has unveiled its ‘Crest Edition‘ in Bombay and Delhi with a 40-page offering at an “introductory price” of Rs 6 per copy. (The ‘Crest Edition‘ branding is embedded below the masthead in italics.)

“Why another newspaper or magazine, you may well ask. Don’t we already have enough? To begin with, Crest isn’t really a new paper or magazine. It is The Times of India unbound, with narrative pieces that sparkle with rich reporting, great perspective and Aha! moments. We will leverage TOI’s unequalled network of correspondents, analysts, writers and editors to anticipate the changes bubbling below the surface of society as well as enhance our understanding of the world around us. Crest is for the curious mind; it hopes to be every intelligent reader’s guide to politics and policy, art and culture, environment and education, and more,” writes The Times of India‘s editorial director Jaideep Bose in an introductory edit.

The new paper’s menu, self-explanatory, is as under: 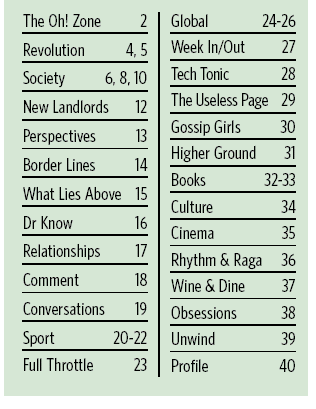 The colour theme is: aquamarine with promise of ‘seas unsailed and shores unhailed’.

“Aquamarine is the colour of adventure, surprise and delight. It stimulates, it excites, and it’s cool. It invokes sky, ocean and earth.”

All things considered, Crest, coming from the house of the world’s largest English newspaper, breaks no fresh ground and is in fact reminiscent of the Sunday edition of The Indian Express in its design and stories.

Nothing about the new paper—the price (double the regular Times‘ Saturday cover price of Rs 3), the quality of the newsprint (standard), the choice or display of stories—suggests “premium”, “lofty” or “high road”, terms used by Times in promoting its newest baby.

In fact, the tiny masthead of the new Crest edition suggests that Times, which burnt its hands with its earlier premium offerings in Bombay—The Independent and The Metropolis in Bombay—is playing it extra-safe in an uncertain advertising scenario and in markets where the perception is growing that ToI is feeling the heat from a variety of sources, including the competition, for keeping reader interest subservient to the advertiser’s.

The registration number and issue date of the Crest edition is that of the regular paper and the editors are the same as that of the regular Saturday paper (Derrick B D’Sa in Bombay market and Vikas Singh in Delhi market), suggesting that Crest far from being a new paper is just a new, souped-up edition of the old one, issued in the hope that the daily reader will graduate to the new edition over the weekend and help The Times bottomline floundering in the face of the paper’s private treaties and other misadventures.

In earlier days, newspapers had the dak (postal) edition, which was printed earlier than the City edition and mailed to faraway centres or transported over long distances by road and rail.

The Crest edition is a similar venture but legal experts in the print industry might like to look at a juicy question:

Can a newspaper with the same title, same registration number, same volume number, same issue number, and same editor be sold at different cover prices in the same City on the same day?

The RNI number for the main edition of The Times of India in Bombay on Saturday is 1547/57.

So, has the Times taken a legally questionable step in publishing and selling a different edition of the paper at a different cover price?