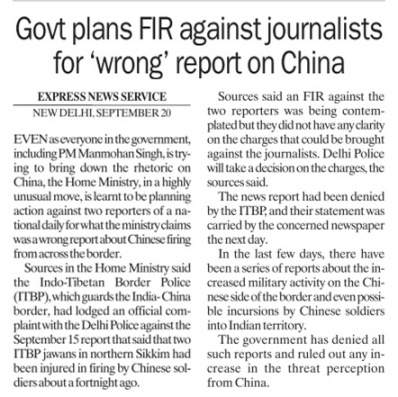 PRITAM SENGUPTA writes from New Delhi: The coverage in the Indian media of conditions along the India-China border from where reports of “military incursions, shooting incidents and even imminent conflict along the Line of Actual Control” are being reported on an almost-daily basis has invoked a strange reaction from the government.

On the one hand, there has been a denial from the very top of the government and armed forces, with the national security advisor even uttering the words “media hype”, even as the two heads of the external affairs ministry (S.M. Krishna and Shashi Tharoor) are battling the after-effects of five-star comfort and Twittermania.

And, on the other hand, the Union home ministry has reportedly decided to file a First Iinformation Report against two reporters of The Times of India. The reporters, Nirmalya Banerjee in Calcutta and Prabin Kalita in Guwahati, filed a front-page story last Tuesday, September 15, of two soldiers of the Indo-Tibetan Border Police (ITBP) being injured in firing by the Chinese in northern Sikkim.

The reported quoted “a highly placed intelligence source, who is not authorized to give information to the media” and also mentioned that ITBP officials in New Delhi “declined to confirm the incident”.

The disclaimer notwithstanding, ToI carried this clarification on the following day on its inside pages:

“Responding to a ToI report, ‘2 ITBP jawans injured in China border firing’, the ITBP had clarified that no such incident of firing has taken place on the India-China border and no member of the ITBP had been injured.”

Clearly, the clarification failed to cool the embers in the corridors of power.

“We have taken this story very seriously. We are going ahead with our decision to take criminal action against the two reporters and we will soon file an FIR. They have quoted some highly placed intelligence source in their story. Let them appear before the court and tell who is this source who gave them information,” unnamed “top home ministry sources” were quoted as saying in The Hindu.

The reporters’ crime according to the unnamed top home ministry sources?

“Indian law proscribed promotion of enmity with other countries.”

The rest of the Indian media has ignored the travails of the The Times of India‘s reporters, and as has become the norm these days, the Indian Express, which reports the story on its front page today, doesn’t even bother to name the paper.

The attempt to tone down the war mongering in the media is understandable. After all, the sight of two gigantic countries , both nuclear powers, staring eyeball to eyeball in a confrontation is not a very pretty one.

Still, some questions need to be asked:

1) Is the government over-reacting to one story in one newspaper? Have other newspapers and other TV channels been calmness personified?

2) By targetting ToI, is the government trying to send signals to other bellicose media which have been itching for action? Is this pre-war media management?

3) Is this story on injured Indian jawans the only “wrong” story on this issue, or any other issue, that merits government reaction? If so, why?

4) Is the government implicitly accusing the media of making up stories? Or is it trying to find out the media’s sources? If it is the latter, isn’t the government chasing the wrong end of the animal?

5) Is The Times of India‘s responsibility to the reader or to the home and defence ministries?

6) Is The Times of India‘s reporters within their rights to not reveal their intelligence source/s, if any, even in a court of law?

7) Does threat of an FIR and criminal action amount to censorship in the name of “national interest”?

8) Who in the government decides whether a story is acceptable or not to the “national interest”, and on what basis, and how often?