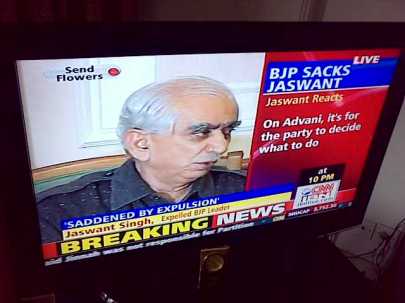 Watching TV used to be simple in the age of terrestrial broadcasting. The advent of satellite, cable and dish have made viewing a more pleasurable experience, of course, but there are also some unintended consequences.

This afternoon, after news emerged that India’s principal opposition party, the BJP, had sacked its leading light Jaswant Singh against the backdrop of his controversial book on Mohammed Ali Jinnah, direct-to-home Tata Sky viewers watching his exceedingly gracious press conference had a red button with an option to “Send Flowers” popping up on their screens.

Also read: BJP defeat is a defeat of BJP brand of journalism

CHURUMURI POLL: Is the BJP in total disarray?